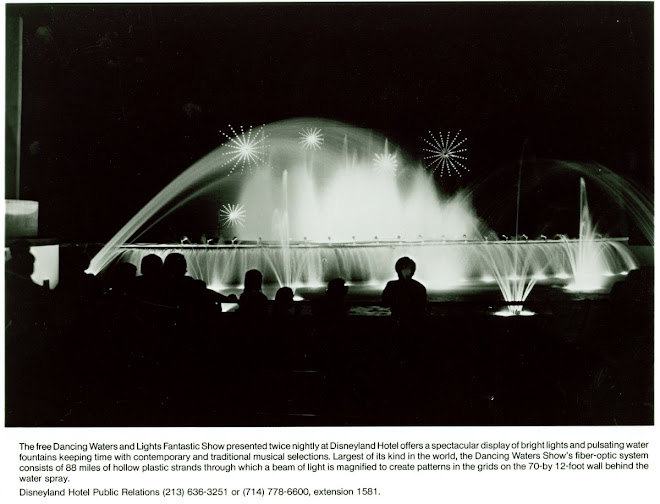 Posted by Magical Hotel at 3:32 PM No comments: 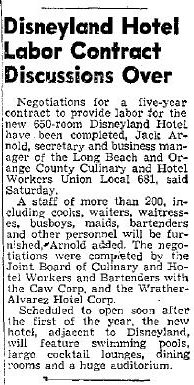 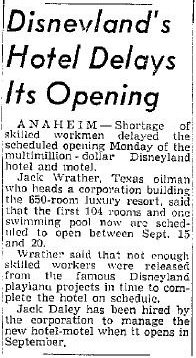 One of the most fun finds are personal photographs from the Disneyland Hotel. Either finding them on Ebay or having someone send them to me, it's always nice to view (and share) someone's own personal photos of the original Disneyland Hotel. They often times show views not normally seen as is the case here with the other side of the lobby shot presented here. I have never seen another photograph with this view. Hope you like these.....I have more! 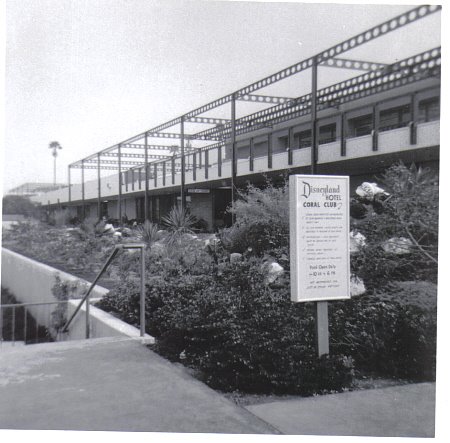 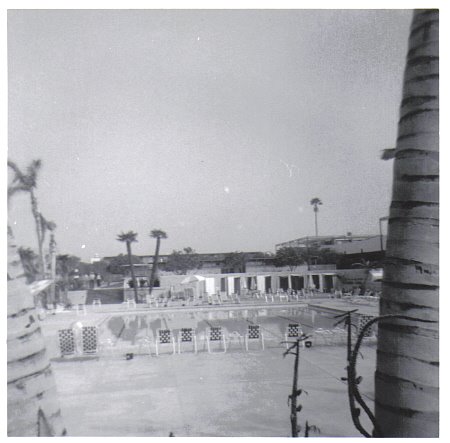 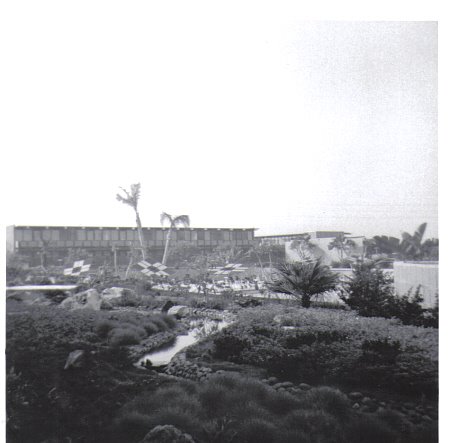 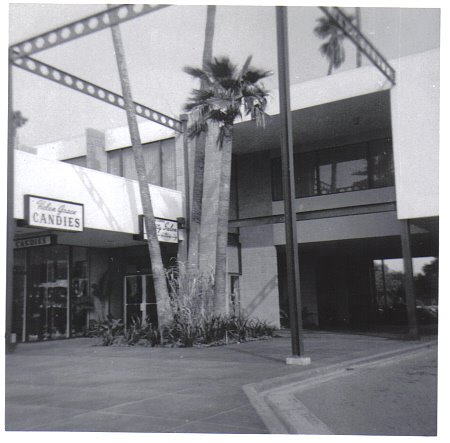 Guest structure with lush lanscaping in the foreground 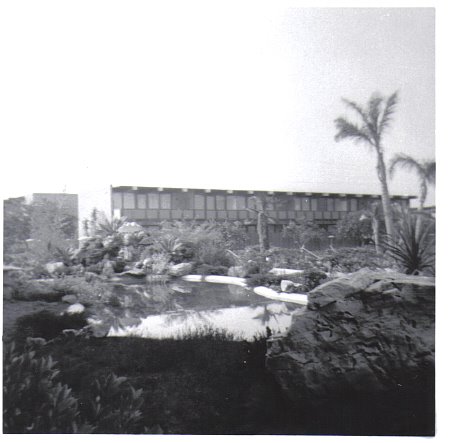 Rare view from the back of the original Hotel lobby 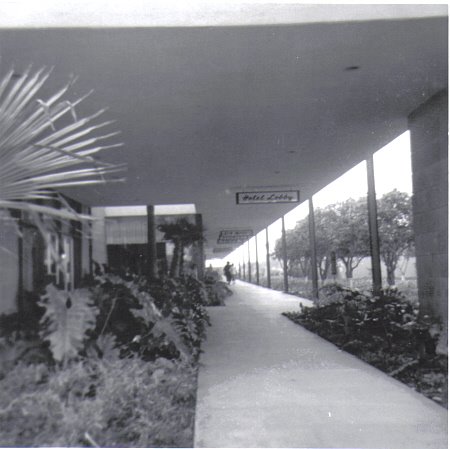 Vast landscaping on the grounds 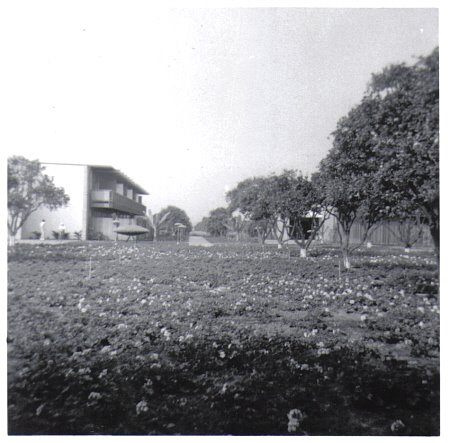 On the second floor above the Gourmet was located a banquet area that could serve parties ranging from twenty-five to five-hundred. On October 28, 1956, Disneyland Cast Members would hold their Halloween Masquerade Ball in the banquet room. Within a few years, this area had been expanded and could be divided into four different meeting rooms. By the early 1960's, it had become known as the Magnolia Room.

Built above the Hotel's shops near the main entrance on West Street, a 13,000 square foot convention and exhibition center was added. The convention hall became Orange County's first ballroom, the Embassy Room. [The original banquet hall (just to the south of the Embassy Room) would be redesigned and named the Magnolia Room.] It was able to accommodate more than 1,400 guests in a theatre seating formation and 1,200 guests for a banquet. Its "official" opening took place on November 28, 1961. 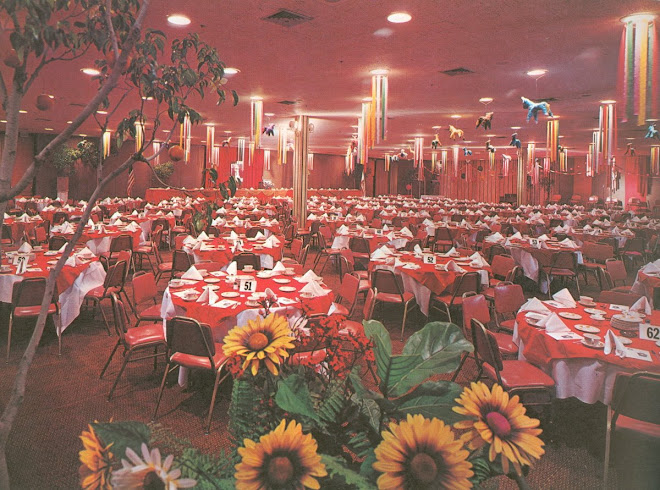 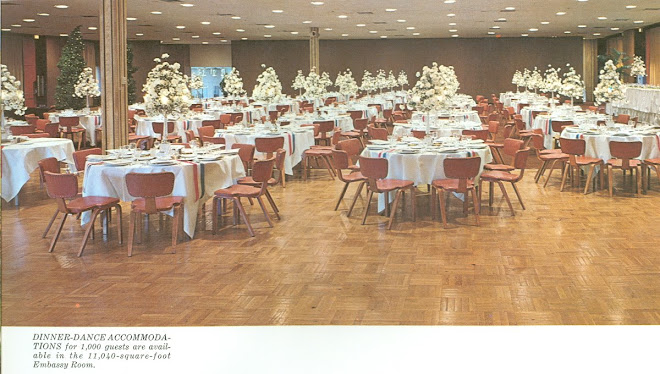 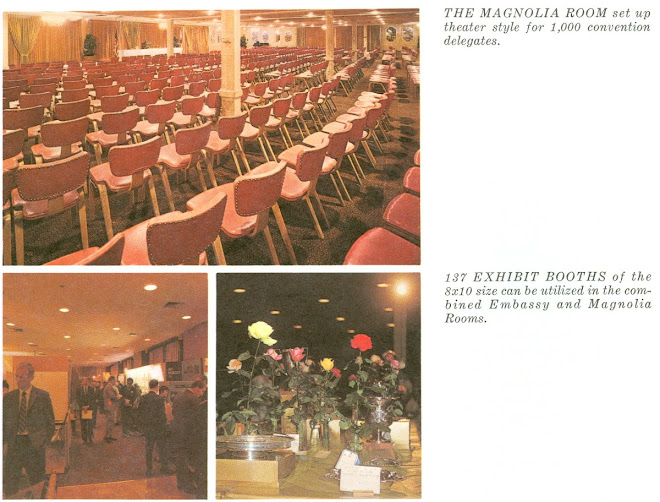 Location of Embassy and Magnolia Rooms on the grounds of the Disneyland Hotel - 1969 Hotel Convention Brochure. You would step down and outside of the building to get from one facility to the other. 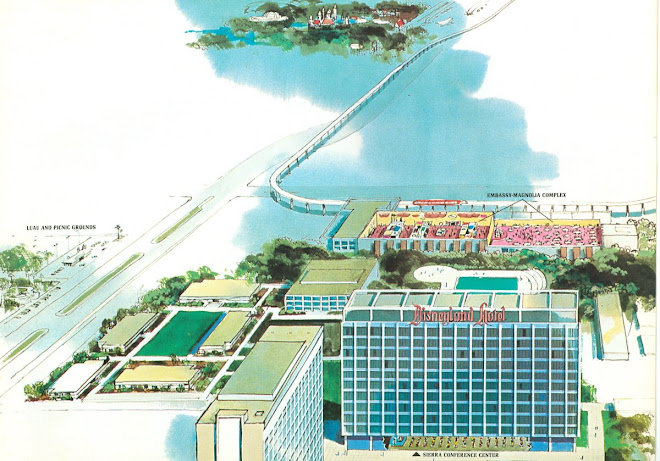 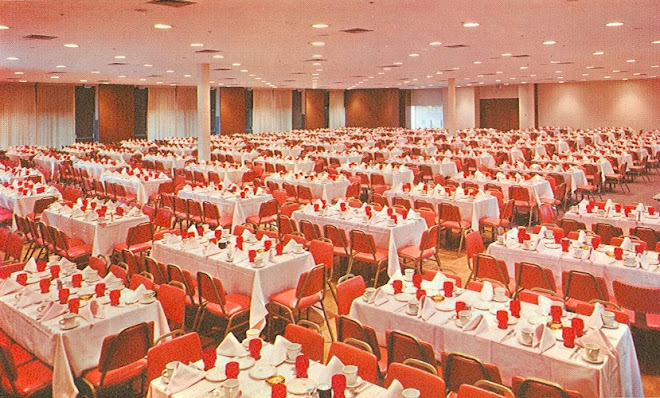 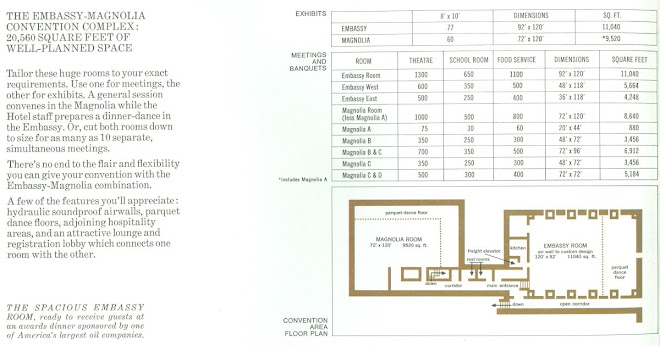 Late in the tenure of the Wrather ownership

After Jack Wrather passed away in late 1984, the Wrather family restructured and attempted to keep the company afloat. It was also at this time that Michael Eisner took over as CEO at Disney and made it a priority to bring the Disneyland Hotel into Disney ownership. Chris Wrather took over as CEO and Bonita Wrather became Chairman of the Board at Wrather Corporation. Disney began to pressure the Wrather's to sell which they eventually did in 1989. This brochure is one of the last while the Hotel was still a Wrather property. It was used in 1987 and 1988. 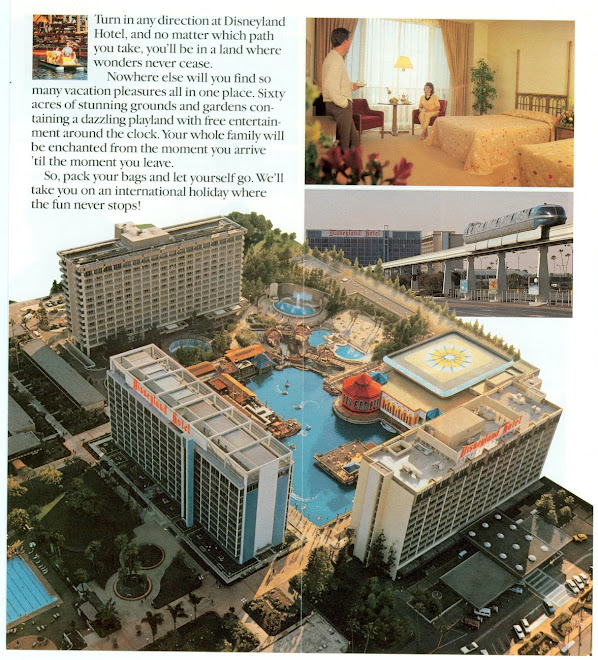 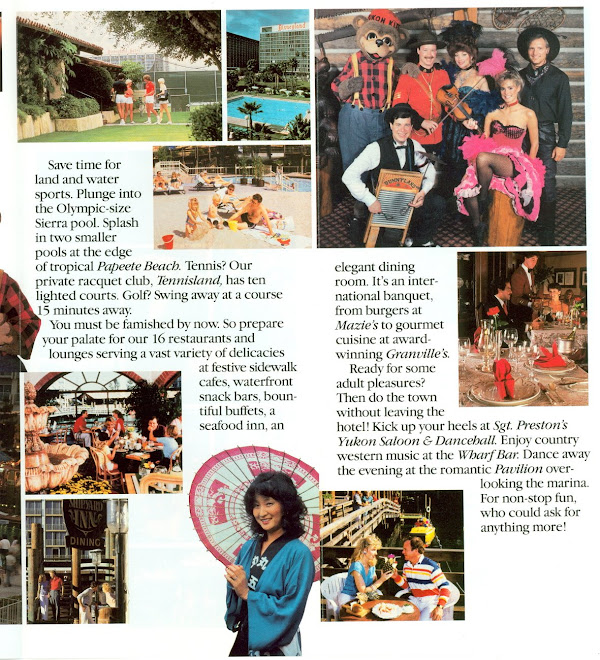 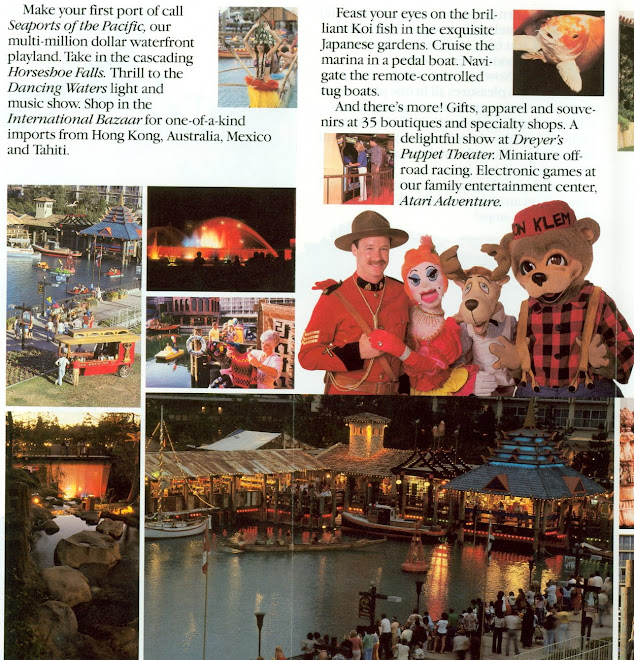 At the request of a blog reader, I have included a close-up from the 1969 convention brochure of the Magnolia and Embassy rooms location on the Hotel grounds.

The Disneyland Hotel Check-In Magazine (1965-1974) was the free publication given to registering Hotel guests at check-in time. These magazines are an invaluable source of information from the Hotel's rich history. You can always find interesting tidbits of information contained within them about some detail going on at the Disneyland Hotel. This particular issue details a complete room refurbishment to the original Garden Rooms where over $400,000 will be spent. I was fortunate to have access to Disney's collection of Check-In magazines at the studio archives. They have almost every issue published and I believe I have the second most complete collection. Many articles were used as human nature stories in our book Disneyland Hotel: The Early Years 1954-1988 http://www.magicalhotel.com. I will do a feature on these Check-In magazines shortly. 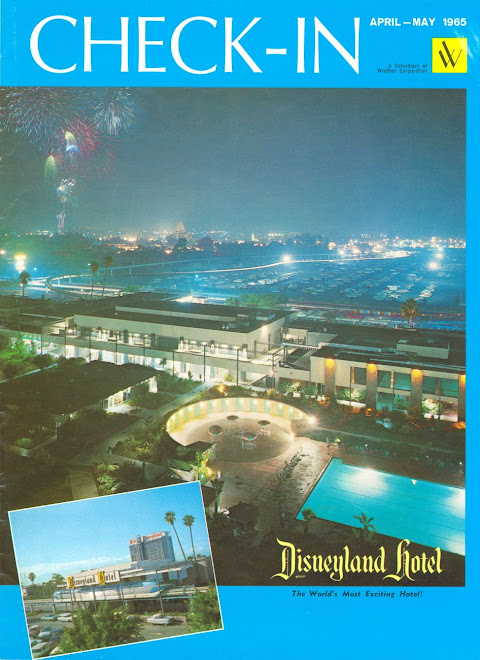 Room Refurbishment 1965 - Details of the updates to the Garden Rooms 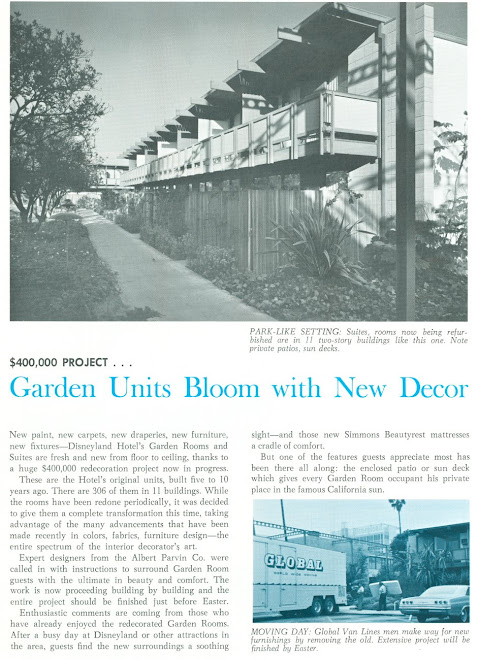 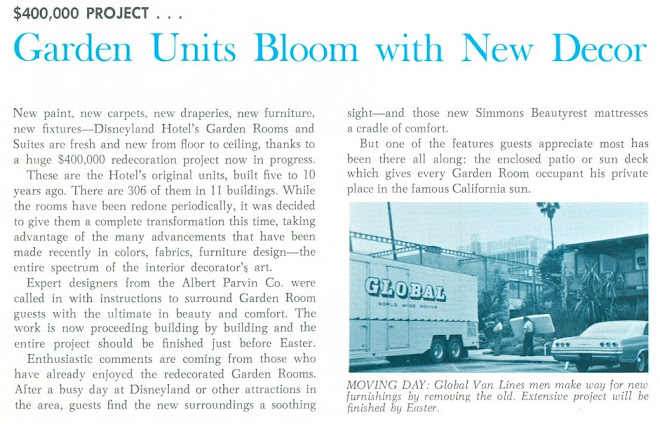