I have to say, in all my research for the book "Disneyland Hotel: The Early Years 1954-1988" this letter was probably the most priceless find. It is well documented that Walt Disney was completely tapped for money when building Disneyland and had to solicit help to get a first-rate Hotel built near Disneyland. Walt had approached many major name chains, including Hilton but no one was interested in building a Hotel in the middle of orange groves in a largely unpopulated, rural area. Even Jack Wrather turned Walt down initially. After some convincing by Walt and with a sense of the possibilities of this venture, Jack Wrather was finally convinced to move forward with the project.

In this November, 1959 letter to architect William Pereira (who designed the original Disneyland Hotel with Bill Luckman), you can see that Jack makes mention of himself being considered a "crackpot" when he first built the Disneyland Hotel.

What I wouldn't give to be a fly on an orange tree when Walt was first talking with Jack Wrather about him building the Disneyland Hotel.

An interesting side note: there is no mention in either Walt or Jack's daytimers about any such meeting taking place in all of 1954. Rumor had it that in the spring of 1954, Walt first met Jack to discuss the building of the Hotel. This tells me it had to be informal and Walt kept it low key. The lease was signed in January of 1955. 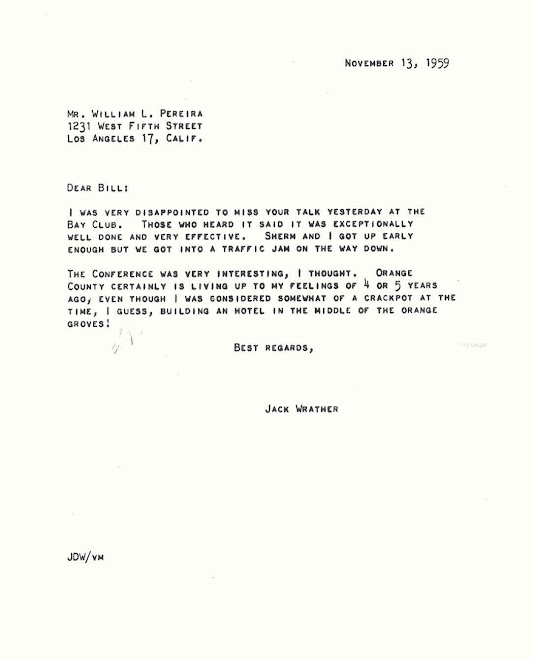 Posted by Magical Hotel at 6:57 PM